So having decided on an Ancient Greek-themed Herd Army with a stylised Minotaur head symbol it was pretty obvious that I was going to need to have a decent-sized Minotaur unit as a centre-piece to the army. Here's an introduction to that unit as a work progresses on them.

In Kings of War, Minotaurs are represented by the Guardian Brutes entry:

Lots of attacks, that hit pretty hard on the charge and a solid defence.
I'd decided a Horde would be the best option here for a centre-piece unit and so I'd need to find some miniatures worthy of this stat-line.

There are a large number of Minotaur miniatures out there in the market place, from GW's massive, steroid pumped, gym-monkeys (not to my taste), to the more realistically proportioned, but still beef-caked offerings from Mierce Miniatures.
Rather than run through all the various options that are out there, I'll simply piggy-back on the hard work of others and direct anyone interested in the different Minotaur options to the sterling work done by the 9th Age crew: http://www.the-ninth-age.com/lexicon/index.php?entry/1352-miniatures-minotaurs/

However, having sent you all off on a wild-goose chase (wild-bull chase??) I should probably point out that I've not actually used any of the Minotaurs in that list for my own unit!
A lot of them felt too feral and were too covered in rags and scraps for the cream of the Mykretenae Herd. Those at the upper reaches of the heirarchy of the Brutocracy would need to be equipped in a more fitting manner...

So having searched around for something more in line with my Ancient Greek them I came across the following option as part of the D&D minatures pre-paint line.
The D&D Miniatures—Savage Encounters: Savage Minotaur For a pre-paint the scuplting quality isn't too bad. The style and armour had a much more classical feel to it that I felt could be enhanced with a new paint job. Finally, with both arms being free of the body it would be much easier to convert as required.
After further though and perusal of the miniature, the pose itself with the body twisted around toward the left arm leant itself very nicely towards that hoplite feel I thought. I just needed to find appropriate weaponry and shields and I thought I could make a half-decent job of this unit.

Weaponry was pretty easy to do. As with my Tribal Longhorns I wanted swords to be primarily the order of the day. Therefore I raided, borrowed and traded for a few Warhammer Ogre Kingdoms arms and swords holding hands.

Removing the open right hand of the Savage Minotaur and replacing with a sword was easy enough, but with a couple of the miniatures I've replaced the whole arm, just to give a bit more variety to the unit.

Shields were another matter however. These guys needed hoplite shields and the ones from the Victrix kit were simply way too small. They looked like bucklers, not Defence 5+ battering rams!
After considering trying to get something like some buttons at the right size, I was clearly running out of ideas. But then the obvious finally struck me.
Look to a different scale...
And sure enough the good people at Irregular Miniatures (http://www.irregularminiatures.co.uk/54mmRanges/54mmAncients.htm) not only did a range of 54mm Greek Hoplites, but you could also buy the hoplite shields separately!
I duly ordered a bunch up and much to my delight they fitted perfectly.

So with 6 D&D Savage Minotaurs and a bunch of swords, shields I was ready to go.
However, given that I was basically using the same miniature half a dozen times in the same unit, I also decided to do a few head swaps which will hopefully break this up a bit. I like uniform in my units, but these are supposed to be Guardian Brutes not clones.

But without further ado, here are the first 2 out of 6 Guardian Brutes pretty much done and dusted. 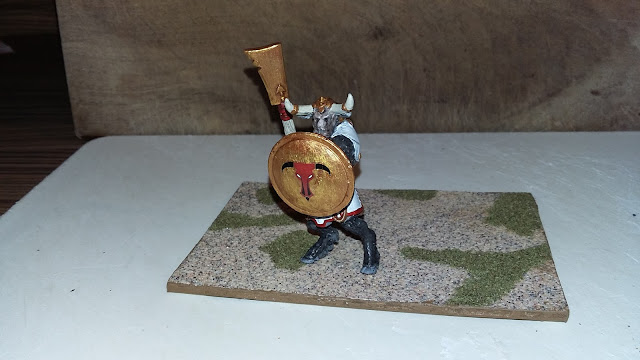 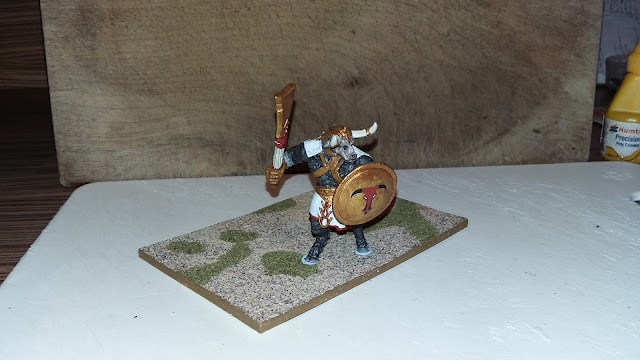 Guardian Brute 1 also shows off the shield design that will appear on all of the Brutes hoplons. they come from the Forgeworld Minotaurs Space Marine transfer sheet that I picked up some years ago for this project. 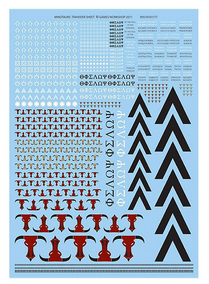 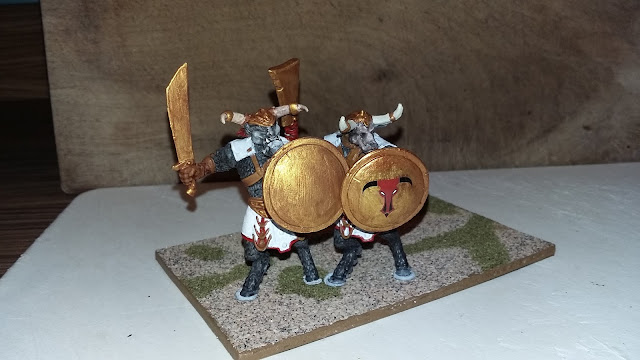 Guardian Brute 2 (on the left above) also has a head swap. This head was taken from the Zenit Miniatures Uro figure with new horns added (a miniature that might well make an appearance elsewhere in this army... ;) ) 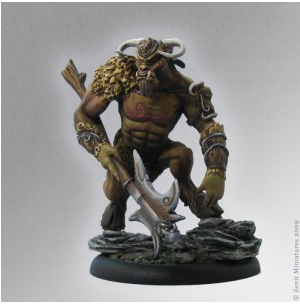 Obviously they are only tacked in place at the moment. I'm waiting to get them all painted up before gluing any to the bases yet. This will itself be an endless joy due to plastic models with quite small hooves for feet and heavy metal shields for maximum top-heaviness...
My plan is to have 5 Brutes across the front, with slightly overlapping shields to give that hoplite phalanx look. The sixth model will be a Standard Bearer who will then stand behind this shield wall

So, there we have it. The start of the Guardian Brutes of the Brutocracy.
More to follow!